It gets even better. A new study finds exercise boosts levels of a protein known to strengthen communication between brain cells via synapses, which may be a key factor in keeping dementia at bay.

The protective effect was even found in active older people whose brains showed signs of plaques, tangles and other hallmarks of Alzheimer’s and other cognitive diseases.

“Synapses are the critical communicating junctions between nerve cells and are really where the magic happens when it comes to cognition,” said study author Kaitlin Casaletto, an assistant professor of neurology in the Memory and Aging Center at the University of California San Francisco, in an email.”All of our thinking and memory occurs as a result of these synaptic communications,” she added.Prior studies have shown that physical activity can reduce risk of dementia by 30% to 80%, “yet we do not understand how this happens at a biological level in humans,” Casaletto explained. 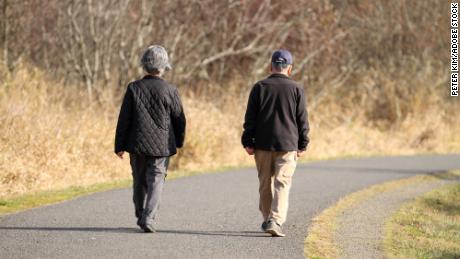 Exercise boosts proteins in the brain that protect against cognitive decline, study says.”We have described, for the first time in humans, that synaptic functioning may be a pathway through which physical activity promotes brain health,” she said, adding that the study could only show an association, not necessarily cause and effect.Still, Casaletto added, “I think these findings begin to support the dynamic nature of the brain in response to our activities, and the capacity of the elderly brain to mount healthy responses to activity even into the oldest ages.”

A well-functioning brain keeps electrical signals moving smoothly through synapses from neuron to neuron and to other cells in the body. To do so, the brain needs to constantly replace worn-out proteins in those synapses, while also making sure they are properly balanced and regulated.

And it appears to work independently of whether a person already has markers for Alzheimer’s and other dementia, she added.”Several prior studies consistently show … higher levels of these same synaptic proteins in brain tissue associate with better cognitive performance, independent of plaques and tangles,” she wrote.”These data reinforce the importance of incorporating regular physical activity into our everyday lives — no matter how young or old we are,” said Heather Snyder, vice president of medical and scientific relations for the Alzheimer’s Association, which partially funded the study.”It’s important to find an exercise you enjoy so it can be sustainable in your routine. For older adults, it’s important to discuss any new physical activity with your doctor to make sure it is safe to do,” added Snyder, who was not involved in the study.

How to get moving

Want to start exercising but aren’t sure how to start? We asked CNN fitness contributor Dana Santas for her top tips on adding more exercise into your life.Don’t try to do it all at the start. You’ll just get injured and derail your motivation, said Santas, who is a mind-body coach for professional athletes. Instead, start with breathing and movement exercises designed to reconnect your mind and body. Then, start walking! Try to build up to a moderate-to-brisk pace.”Start by walking just five to 10 minutes daily over the first few days while you figure out the best time and place for your walks,” Santas said. “Once you’ve determined the logistics, begin adding a few minutes more to each walk. Ideally, you want to get up to about 20 to 30 minutes per day.”

Equally important to adding movement to your life, Santas advises, is to make it a habit.”Take steps to make it sustainable so it becomes a part of your lifestyle that you enjoy and take pride in rather than viewing it negatively, like a chore,” Santas said.She suggests “habit-stacking,” or doing a simple exercise before, after or during a normal daily task, such as making your bed, showering and brushing your teeth.”For nearly eight years now, I’ve been doing 50 body-weight squats or two-minute wall sits while I brush my teeth,” Santas told CNN.Adding movement to daily tasks can quickly add up. Let’s say you got up and moved three times an hour during your workday.”That’s 24 minutes of exercise daily. Add another 10 minutes of walking or stair climbing before or after work, and you’d be at 34 minutes daily, or 170 minutes per five-day workweek,” Santas said.

“That’s well over the weekly threshold of 150 minutes, or two-and-a-half hours, recommended by the World Health Organization — without ever setting foot in a gym.” NNPC TO SPEND N621b FOR REHABILITATION AND CONSTRUCTION OF LAGOS-BADAGRY-SEME BORDER...